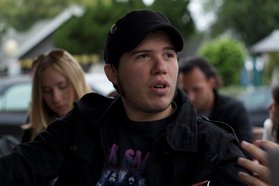 Courtesy of Paulina Bryant
Ever since I was young I've had a fascination with the world of the screen.
To me games were not just a set of rules, but a destination. Because of that I've always felt more drawn to titles that had a strong sense of place in their design. It made a world that felt real, as if the people on the screen continued their lives whether or not I had been playing.
I began my college career studying film and the digital arts at Chapman University. My emphasis was in Visual Effects and I planned to peruse a career in Directing visual effect heavy films. However, after two years my child hood passion for games came crawling back. I was inspired by taking classes in Level Design and Game Development. Before I knew it I was starting a year long Thesis project making a Prototype using the Unreal Development Kit. I graduated with a BFA in Digital Arts with a minor in Game Development Programming.

I've learned valuable lessons in developing worlds in games and also what it takes to be a leader. But I've also grown to recognize that the learning process never ceases, and I look forward to pursuing the art of crafting worlds and spaces for player's to explore, and inspire in them the fascination I had as a child.

Feel free to contact me, I am currently seeking work while continuing development on independent projects.