Untitled from Matthew Perez on Vimeo.

In conjunction with the playable prototype of the Game, I scripted an entire trailer within the engine. Utilizing game assets and animation, I aimed to capture the tone and mood of the project as a whole using UDK's Matinee system as well as extensive Kismet sequences. I then edited the captured footage later in Adobe Premier with a unique score and sound design as well as a VO track for our main character Vincent.

Apart from the overall design of the game and scripting of the levels I was the chief World Builder for the project.
We decided early on that art assets would constructed in a modular fashion as to leave the level design more open to iteration. Once a sizable asset library was created I would then construct the level from the ground up, light it and script sequences. 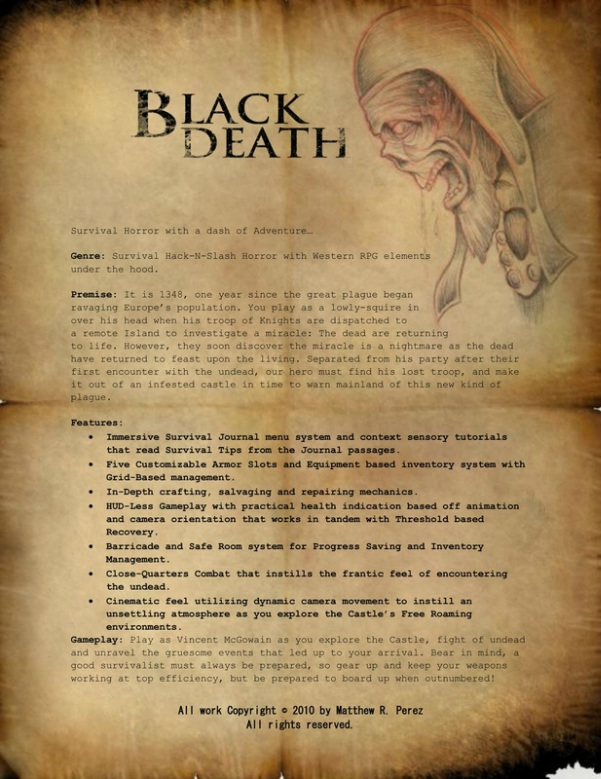 In the beginning of my Design phase I draft a High Concept document. A one page summary of the games core feature set, a short synopsis of the story and it's genre.

Over the course of the early stages of development some features will change, be removed or replaced based off feedback. The feedback would also give us an estimate of what could be accomplished and help us define our scope.

The objective is to have the team understand the type of game were are going for from a very conceptual level as to leave room for growth or iteration down the road.

As you can see, the game I was aiming for was a frantic medieval style survival horror experience, a Resident Medieval you say.

We  draw on real events of the period and have the art style adhere to the period in order to enhance the horror of the game.
I felt early on that introducing any fantasy elements beyond the Zombie hoard would detract from the vulnerability the player is supposed to be feeling in these tense situations we thrust them into.

The experiential theme of Vulnerability will remain our chief tenet through the rest of the game.

Before each feature was implemented I would define it in the design document first as a base line for its implementation. However, these were by no means the final forms of each mechanic. We followed an agile development method so based off results of the initial implementation we would quickly iterate off the results in engine. So many of the features described are in essence the first iterations of each feature before they were fine tuned for the finished prototype.

I will then map out the overall experience of the game from a player perspective.

This not only maps out the usability of the game, but also helps the team visualize the relationships each of the core mechanics have with themselves to form a complete experience.

From the beginning of the chart you will see experience always begins as any game should with your open title screen.
Next it flows directly into the exploration of the game. This is our central hub in the game, and how most of the events in the game play out.

Setting and Atmosphere are key elements in the horror experience to build tension in the player before scripted events. By having all other elements flow from exploration, we can use the environment the player explores to express these tones to the player. By using sound queues and scripted camera angles we can begin to build this feeling in the player before tossing combat, or puzzle situations at them.
Ultimately having the player solving a level long puzzle to complete a given level. 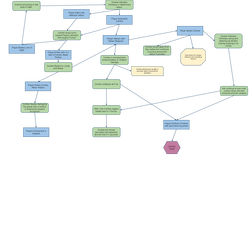 In order for our programmer to set up the AI I drafted a flow chart that maps out a typical encounter with undead, and the various response expected from the player in order to succeed.

Level Design, where the rubber hits the road.

Before I even draft a top down map, I first begin with a simple flowchart of the level. This helps me establish pace, as well as informs programmers and artists of key areas of game play. These are typically areas where the player encounters an obstacle or a level stimulus portion where key information must be conveyed to the player.
Essentially every level is comprised of four components. Level stimulus which drives the player, their response to the stimulus, an obstacle they must overcome, and the key they must obtain to over come the obstacle. We chose to have the central objective change through the course of the gameplay.
When you enter the Castle, you're a fish out of water. You don't know what has happened and it is a natural urge for a player to explore. By blocking off most pathways the player must explore all the nooks and crannies of the level to finally discover an open path, and in this case is the barrack. After this prolonged set up of the environment, and indirect sounds, it's time to toss your first encounter at the player. In order to keep in mind the frantic feel of gameplay, the first zombie is thrown at you without any tutorial at all. It is a particularly week zombie and with enough frantic swipes the player will realize the torch can deal damage and even cause the enemy to catch fire ( as well as yourself). It is when the zombie is burning the player can choose to either continue their fight, or use the winch inside the room to raise the gate and escape.Now that we've established the peril of the undead, we toss some more at the player.

Trying as much as possible to de-emphasize the combat as less of a killing mechanism and more of a defensive mechanism, we toss the player in a biding time situation.The player must bide time as the gate rises by using defensive attacks to bat not one but now four zombies back. If they are successful they are given a victory that is quickly tarnished by the realization that the once empty courtyard is now teeming with undead. A quick cut-scene will hint the player to their escape taking them up and over their enemies into the North Gate house. It is here that the player will be tempted ( as most are) by a weapon upgrade. Grabbing the sword triggers the north gate to fall. You now gain the most powerful weapon in the demo but you are now trapped within its walls. You must now use it fight your way to the burning inner ward. After this portion and a quick cut-scene we dial down the action and the player can use a safe room for the first time.
This is first mid point of the demo and the player has been through a lot so we give them the option if need be to regain all their health. After they regain their health they venturing into the inferno of the inner ward. A stark difference in light and pallet create a diverse sense of environments even though most  of the assets had to be re-used for the inner ward in our time crunch. During this portion you are met with different challenges then simply the undead, such as a burning pit of wood and tar below you as you scale the rooftops of the inner ward's village and back to the courtyard. Now armed with the Great Sword the player shouldn't have a problem getting through the zombies, but there is still enough that the main gate is blocked.
Venturing back up to the north gate the player drops the winch in and raises the gate again. A huge siege cauldron sits behind the winch, the player can uses this to pour hot tar on the enemies, this attention to detail will reward the player with an easier fight back out of the Castle. Once down below the player must get through the main gate before they die in order to trigger the end game cinematic which ends the demo for the player.As you can tell the game became much more linear near the end of our development cycle. This choice was made out a reprisal of our scope half way through the project. We felt we needed to dial back certain elements in the design in order to actually get the mechanics we focused on into fruition, a tough choice but ultimately a valuable lesson in scope control.

Once I have a basic layout working for the level and the flowchart feels right I begin drafting content documents.
These documents give a brief history of the area and how it got to how it was as well as a description of the the particular environment should feel from a  player's perspective.
I do this for all the key areas of the level so the artist get a clear picture of how each asset should fit into the overall picture.

Once most of the assets described in the content documents are finished I begin my World Building process. Some assets will also be eliminated if they can be used else where in other key areas.

Once we got through  all these stages in development I began work on the teaser trailer utilizing environments I created for the level and creating a separate series of sub-sequences for the trailer so we would be able to access certain cut-scenes for in-game purposes.

Untitled from matthew perez on Vimeo. 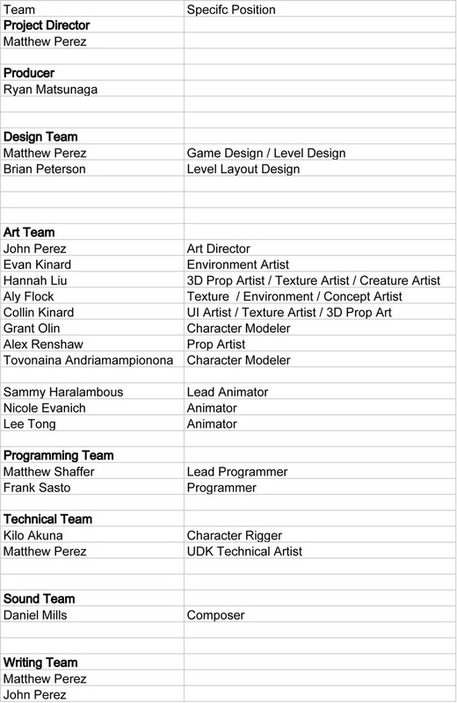 A Glimpse into the Future of Black Death...

Since my graduation in May I have continued development of what is known now as PROJECT PLAGUE with some of the same team members.
We have since overhauled the entire game to run on the most recent build of UDK for stability as well as a complete redesign in terms of the combat system, and level design.
Art has been updated from prototyped items to finalized versions, as well as various pieces of concept art we are using to drive the tone of our newest build.
Below will be a few screens of our new re-design we are planning to have playable by the beginning of November. 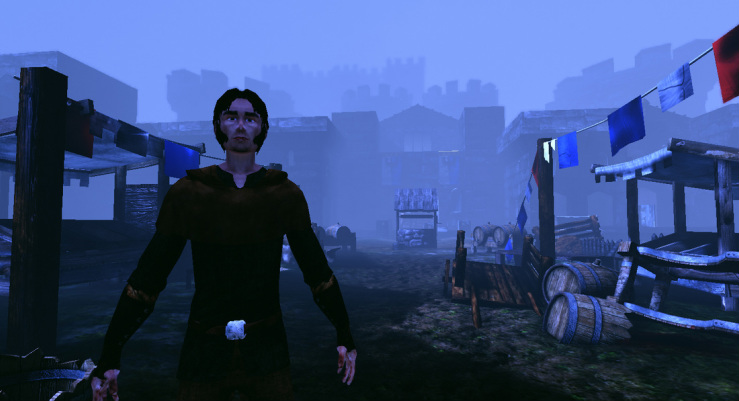 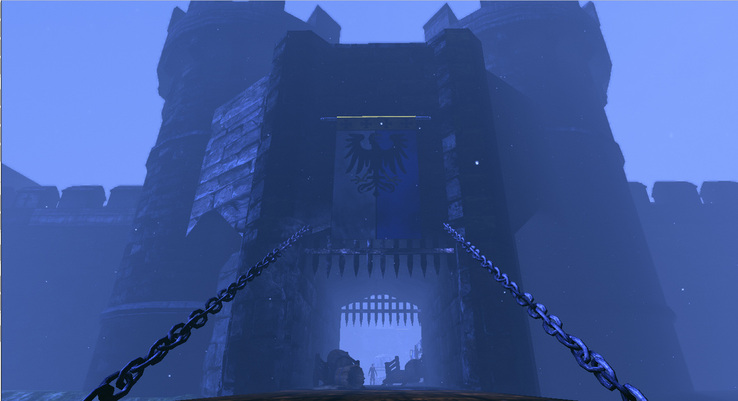